Spermcheck – How Does It Work?

It only takes one sperm to fertilise an egg, but to do so the sperm must get to the fallopian tube from the vagina. It’s not an easy task and many of them just don’t make it. Luckily men have millions of sperm to give a woman a better chance of becoming pregnant.

Most men have 20 million sperm per millilitre of semen, but to keep sperm healthy there are a number of things you should and shouldn’t do. For example: 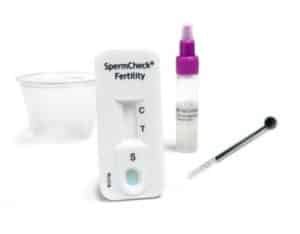 If you have been trying for a baby for some time and you are worried about the quality of your sperm, you can have a full semen analysis at your doctors or you can buy a spermCheck kit from your local pharmacy, online or at your supermarket.

If you don’t feel the need to go and see a doctor just yet, but you would like to know about your sperm count, SpermCheck says it is over 98% accurate as compared to a microscopic laboratory test.

You use the kit by waiting for at least 48 hours since your last ejaculation and then using the cup provided with the kit, ejaculate into it. Let the semen stand for about 20 minutes, stir your semen with the stick provided according to the instructions. Remove the semen using the plunger and place it in the special solution bottle provided.

Put the cap on the bottle and move gently to mix up the solution. Do not shake the bottle, but turn it upside down a number of times. When you have done this leave the bottle to stand for two minutes and then prepare to put your sperm in the test device. You do this by opening the bottle and squeezing six drops of semen onto the device where indicated. Only put six drops, no more or less. You then leave the test to stand for about 7 minutes and then it should be ready and you can read the results.

The test will give you a positive result or a negative one. A positive result means that your sperm count is considered normal because you have more than 20 million sperm per millimetre.

If you have a full check up at the doctors, they will test for:

This means the speed at which your sperm moves. In order to reach an egg, the sperm need to be able to move forwards in a straight line. If  sperm motility is poor, it means that sperm movement is slow, or the sperm travel around in circles. Some sperm hardly move at all. A count of around 32% of sperm that are non- swimmers or move slowly usually mean that your motility count is low.

Morphology looks at the appearance of sperm and its size and shape. It looks to see if there are any head or tail defects. Misshapen sperm doesn’t mean that it is unable to fertilise an egg, it just means it may have more difficulty reaching the fallopian tube.

Thickness and Amount of Semen

If semen is too thick it may affect the concentration of the sperm. The amount of sperm in one ejaculation should be around 2 to 6 millilitres of semen.

There are many reasons why your sperm count may be low and your doctor can give you all the help and advice you need. If you do a test and you find your sperm count is normal, get your partner to find out when she ovulates and try and have sex at that time.